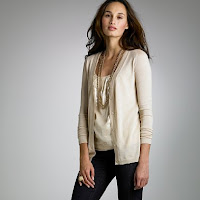 "Let’s hear it for fashion that is just a little bit eccentric, that in its texture and slight hint of sparkle gives a suggestion of mystery. Also, I like the fact that she wasn’t engulfed by a big wooly coat; you could see the whole outfit, with her trusty cardigan showing a bit. You could see her.

Since Saturday, Mrs. Obama has also worn clothes by Maria Cornejo, Narciso Rodriguez and J. Crew. On Sunday, for the concert at the Lincoln Memorial, she wore a smart-looking camel suit specially designed by Rodriguez with a metal-studded black shell. That morning she wore his plum silk and wool dress with a lavender coat, its sleeves wand thin to accentuate, Rodriguez said, her height. “She never looks like she went out of her way to look dressed up,” he told me this morning by phone. He added, “I think she just naturally knows what she feels good in. It’s not overwrought.”
The designers she has chosen "are also three of our best designers—innovative, hands-on and independent."